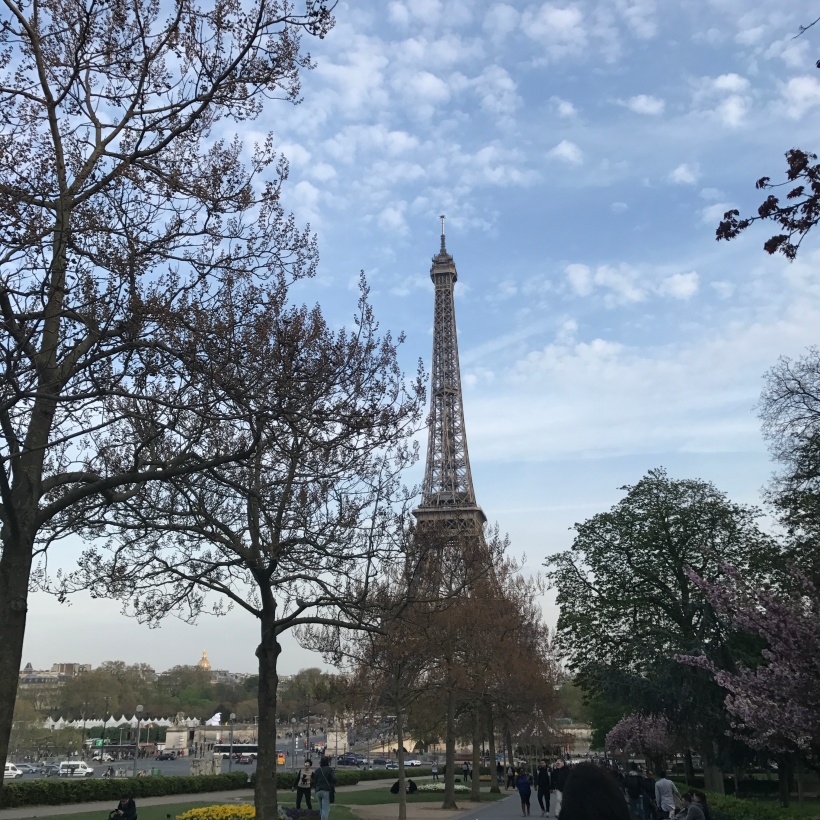 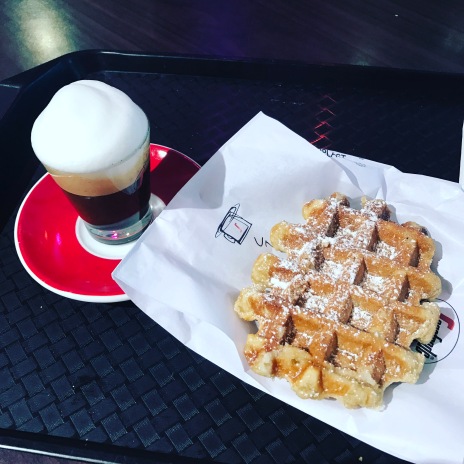 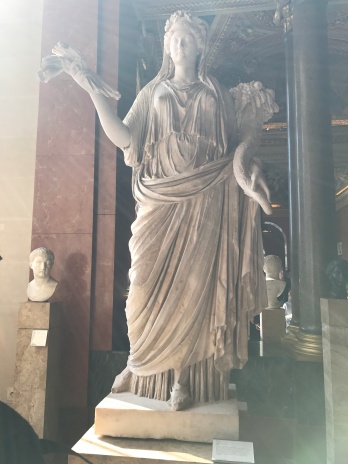 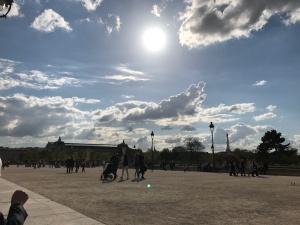 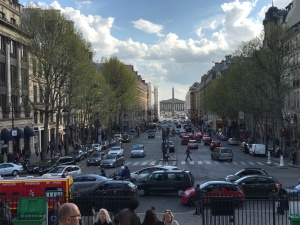 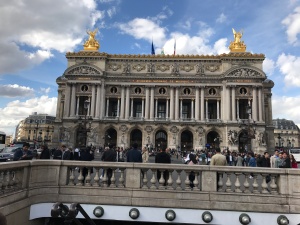 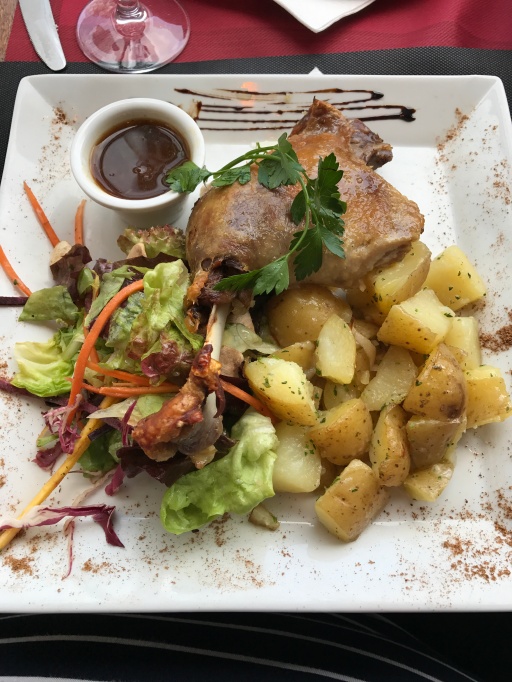 Paris. I’ve said it before and I’ve said it again. This is my favorite place on earth. My trip ended where it began in this place that I love. My last few days comprised a trip to the Louvre, delicious noms, making sure I had everything I needed, and a reunion with my high school French teacher and color guard coach. During this time, I also day-tripped to Reims with my buddy, L. I walked along the Seine; ate chaussons aux pommes, confit de canard (a few times), steak frites; and purchased about 10 bags of carambars fruits to bring home (that disappeared way too quickly). 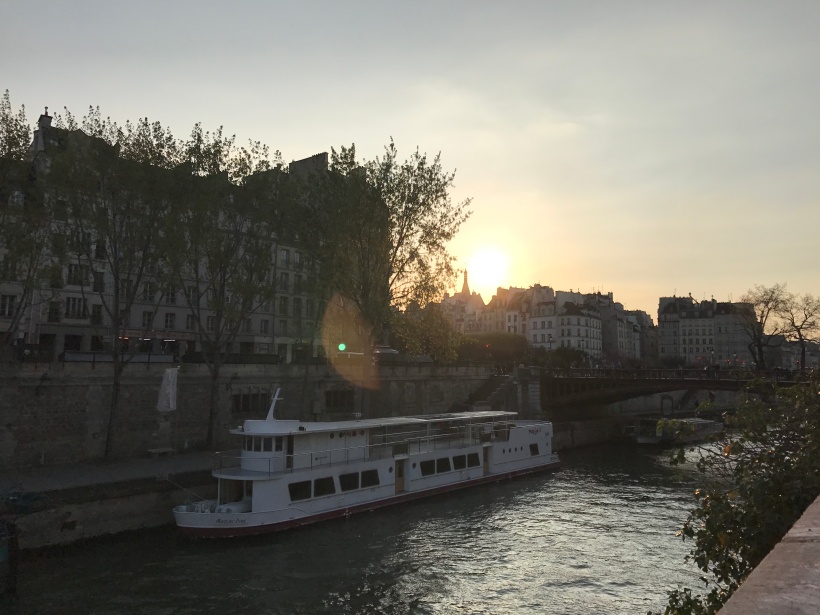 My first time in Paris was in January–it was cold, grey, and wet, but I loved it nonetheless. My second time in Paris was my study abroad from August to December. I enjoyed Paris in the summer and fall, and a brief hint of winter again. In 2017, it was my first time visiting Paris (and Europe in general) in the spring. And boy…She did not disappoint. My favorite place in the world put on a glorious spring show for my last days in Europe.

I was glad to have this time in Paris. After my mom died the first few hours I was there in Fall 2016, I thought that the feelings I felt then would be my association with the city forever. And in some ways, it will. I will never be able to think of Paris without thinking of my mom–but if I hadn’t been on my way to Paris in 2016, I wouldn’t have seen my mom the day before she (suddenly) died. I thought about my mom a lot those last few days. Everywhere I looked were things that reminded me of her: the beautiful flowers, the advent of spring, meeting up with my high school teacher. All things that reminded me how complex grief can be. I think I love Paris more now because it will always remind me of my momma, two of my favorites that I love the most in the world. 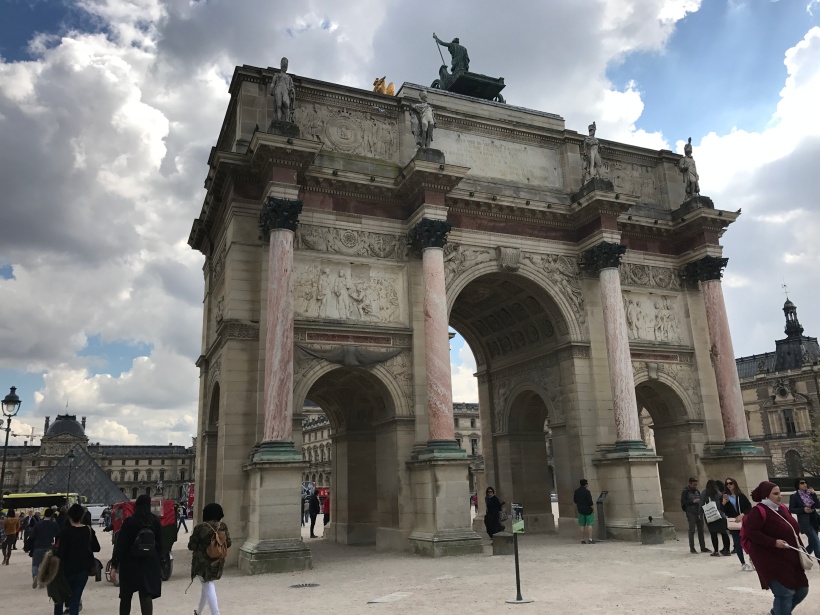 And with my last few days in Paris, EuroTrip 2017 came to a close. It was *such* a good trip. Though there were some negatives– rain, lack of internet, loneliness, sunburns, and sore feet–those have faded with time, I remember those less than the positives — the art! the cities! the sights! the weather! the flowers! the reunions! the food! Plus, I think I have a good handle on how to tackle some of those problems for future trips (read: in a few short weeks!). Ciao and au revoir to Eurotrip 2017! 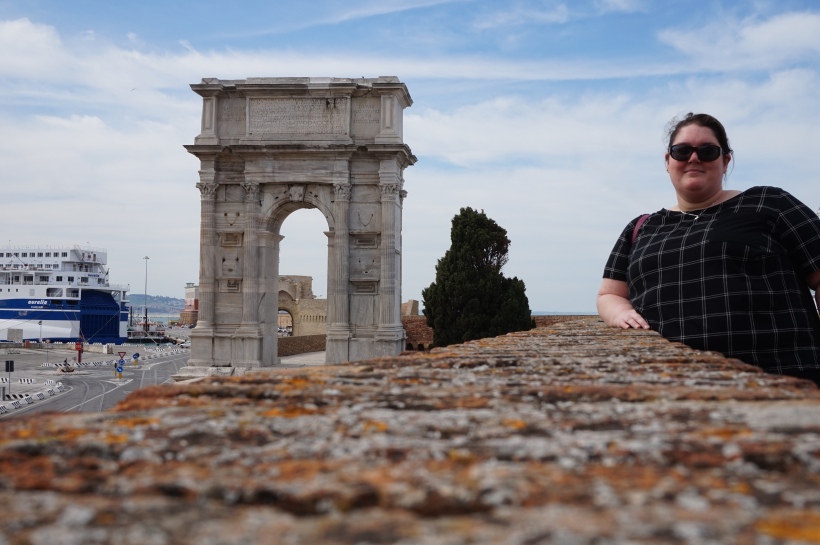 2017 was a mixed bag. It didn’t suck as much (at least for me personally, world events is another story) as 2016, but it came with ups and downs. There were some pretty obvious highs, and some pretty obvious lows, namely, still grieving the loss of my mom played a very large roll that filtered into everything. You don’t realize how fundamental someone is to your life until they’re no longer there. BUT I like to take the time to reflect on what made 2017 bearable and okay. Here it goes, in no particular order.

This was obviously a hard list to make. 2016 sucked for me like no other year for reasons obvious to most who know me well. I’m not overflowing with optimism about 2017…much of what was hard about 2016 is not going to disappear as the calendar pages flip. However, I am trying to remain positive. Good things did happen in 2016, good things will happen in 2017. I’m going to attempt to focus on the good. What 2016 has done is made me exceedingly grateful for what I do have. 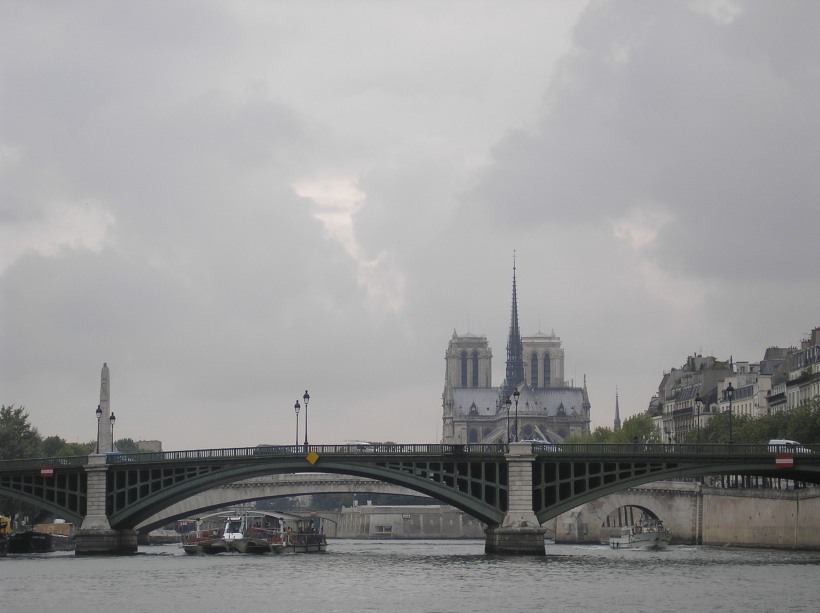 I have been putting off replanning my Eurotrip (previously Eurotrip 2016, now Eurotrip 2.0 or Eurotrip 2017). I think it’s pretty obvious why it has been hard. BUT, I finally did the biggest thing necessary and purchased my tickets for Eurotrip 2017. My plane tickets are booked.

My last two visits to France have both been important milestones.

In 2016, obviously, my life changed big almost immediately after setting foot in France. Seeing Paris through shocked, grieving eyes was at best what can be described as surreal. Looking back on it now, barely two months later, I recognize that I felt comfortable there, even in the worst possible emotional circumstance (much of that was also thanks to a very dear friend). For a while recently though, the idea of going back made me nervous. Paris will, for better or worse, now always bear the association of being where I learned of and began to grieve my mom’s death. What would it be like returning to this place that I have always loved, that now holds this connection with the loss of one of the most important people in my life?

Before I left for this trip, my mom was so excited for me. Her last words to me were full of excitement, pride, and hope for my time there, for my adventures, and for what I was going to try to accomplish regarding my work. There is no one who would have wanted me to go back to Paris, and enjoy myself, more than my Momma.

EuroTrip 2017 will unfold much like EuroTrip 2016 was supposed to, save one destination. I will not being going to England. My stop in England was essentially only for fun, and in getting reimbursed for my lost expenses by my department, it didn’t feel right to include those monies and London is not cheap. I’m okay with that though — this will certainly not be my last trip to Europe.

Here are the original destination blog posts I made for EuroTrip 2016.

*I had the Step-by-Step theme song stuck in my head the entire time I was writing this post. If you’re a child of the 90s like me, I hope it is in yours now too 😛 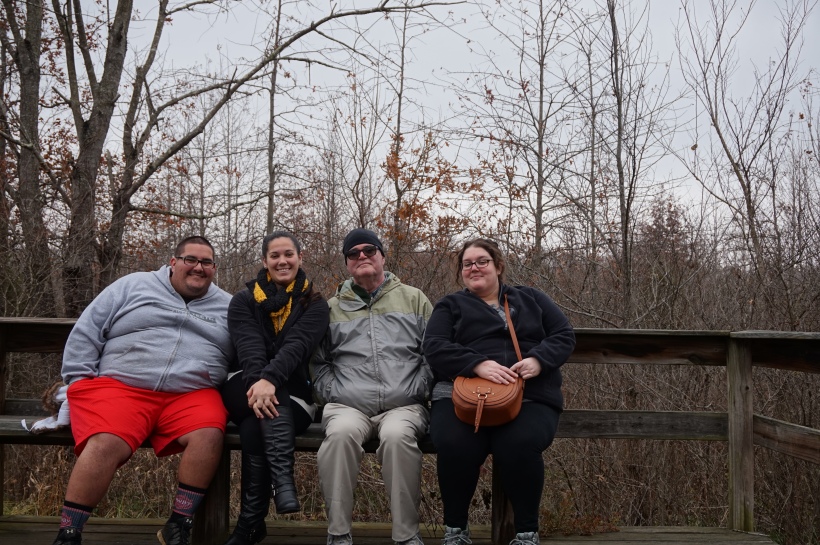 This year, I stayed put for Thanksgiving, and for the first time, my family came to me. I thought, perhaps selfishly, I don’t know, that the first Thanksgiving after my mom’s death would be easier for everyone if we did it a little differently.

This year, dad, brother, and sister packed up the car and drove to me. I had loose plans for a good time…show them around town (this was their first visit since moving me in 2012!), go to the movies, eat food, and perhaps go on a hike. We did all of it:

I drove them around campus (it was cold and rainy so a walk was not desirable) and we made a trip to the Barnes and Noble, so we could purchase books that none of us really needed.

We saw Fantastic Beasts and Where to Find Them (I highly recommend it– I enjoyed it, even if I want BOOKS and not movies of these new stories). Sister even liked it more than Harry Potter (we may have scarred her by taking her to see Harry Potter and the Chamber of Secrets when she was a wee lass of six– That basilisk was a little scary)! 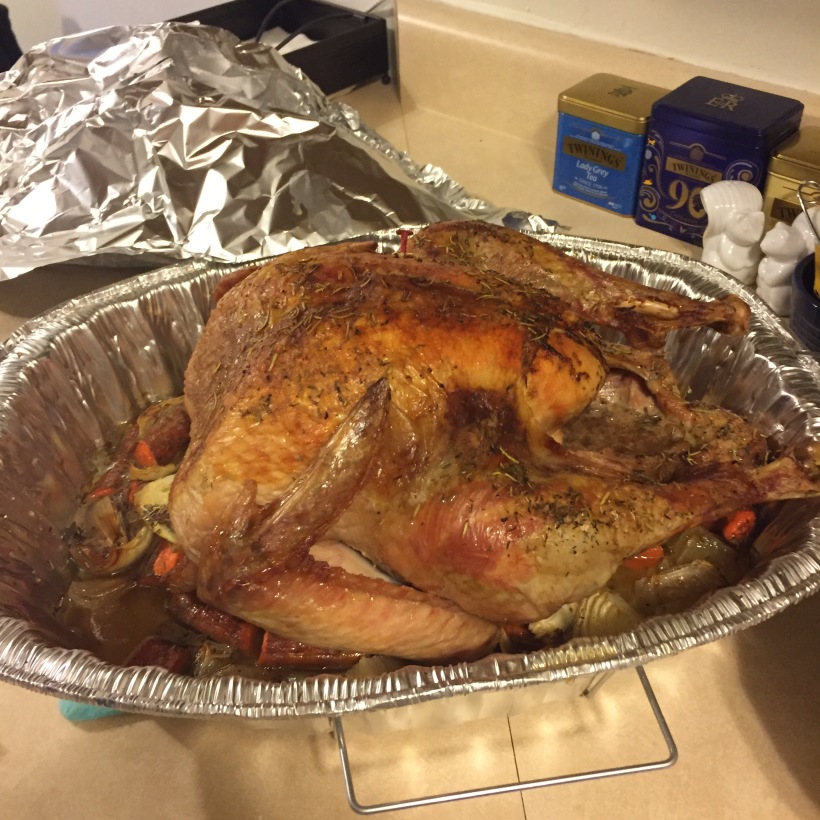 I cooked Thanksgiving dinner, successfully, I might add. The only thing I didn’t do was peel and chop the potatoes, thanks to Brother and Sister respectively. We watched Christmas movies after dinner and had a good day.

Friday, we went for a hike in a local nature preserve. It was quiet and empty and it was nice to get out of town and do some woods-walking.

It was a good visit. There was no fighting or squabbling (though, I think I offended my brother when I told him to stop making Macaulay Culkin crack jokes whilst watching Home Alone). The only misbehavior was from my cat who was decidedly rude to my family while they were here (see Sister’s snapchat below). 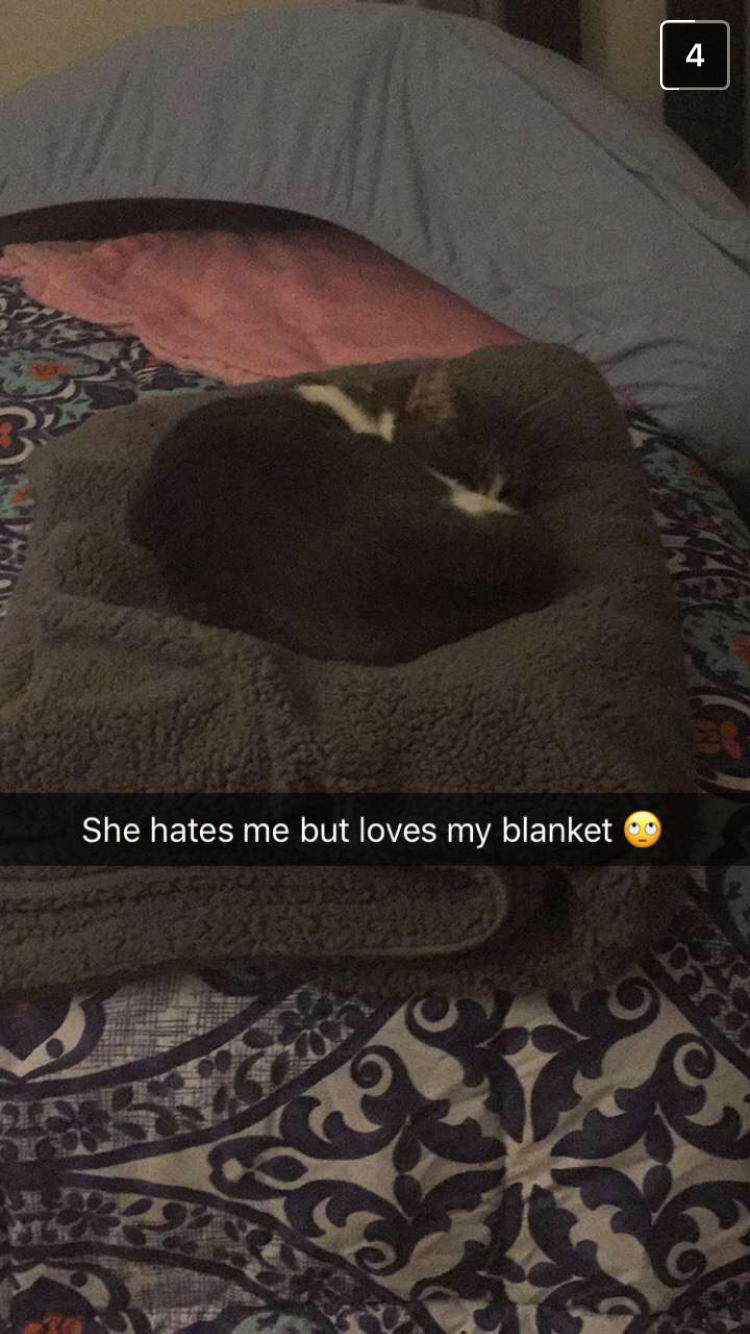 My family left on Saturday. I had been worried about them leaving and me taking it not so well, but I was surprisingly fine. Tired, but fine. It didn’t really hit me until Sunday that this Thanksgiving was  different, and even then, the level of that difference hasn’t registered. Grief is a funny thing, it can hide and not show its face when you expect it to do so. I had cooked and served Thanksgiving in my house before, but this time it was for my family. And the only reason that was the case, is because Mom is gone. The finality of the gone-ness still hasn’t sunk in; I was expecting Thanksgiving to put the goneness into focus, but it didn’t really, not in the way I was expecting.

Whatever the state of my grief-emotions, the first major holiday (excepting my birthday, my dad’s birthday, and my sister’s birthday, all of which occurred right after her death) without Mom has been celebrated. And, I miss her.

Many of you, those who know me well or even a bit through Facebook, know that Eurotrip2016 didn’t happen. I made it to Europe, but I quickly returned home.

Those are words I never thought I’d say, an idea I’d never thought I’d have to come to terms with at least not at this point in my life, but I find myself saying it out loud at least once a day because it seems so incredible that she could be gone.

I will come back to this blog when I do this trip again (TBD – but it’s looking like March is the goal), but I leave you with one of my favorite pictures I took during my three day weekend in Paris. My dear, dear darling friend Lindsey and her beau, Arnaud, took care of me so well. We went to the Jardin des Plantes where I fell in love with this one particular plant (if anyone can tell me what it is, I’d be grateful – it’s the periwinkle blue guy) and took a million pictures of it. This visit to a garden full of beautiful flowers was one that my mother would have greatly enjoyed and I felt oddly at peace. It was a good thing to do and I’m glad Lindsey and Arnaud took me. ❤ 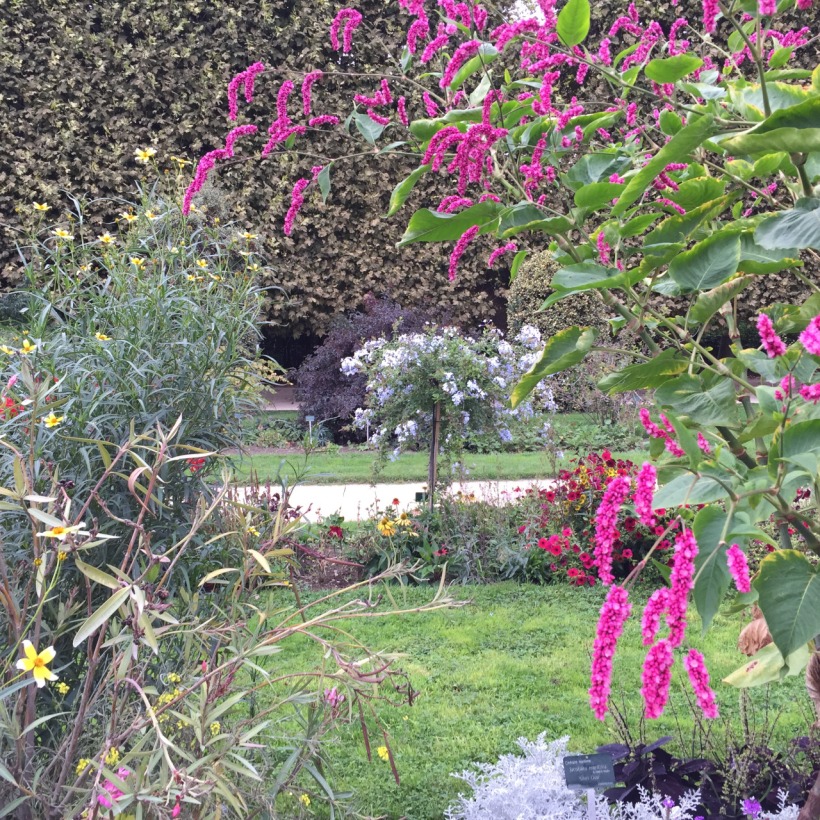