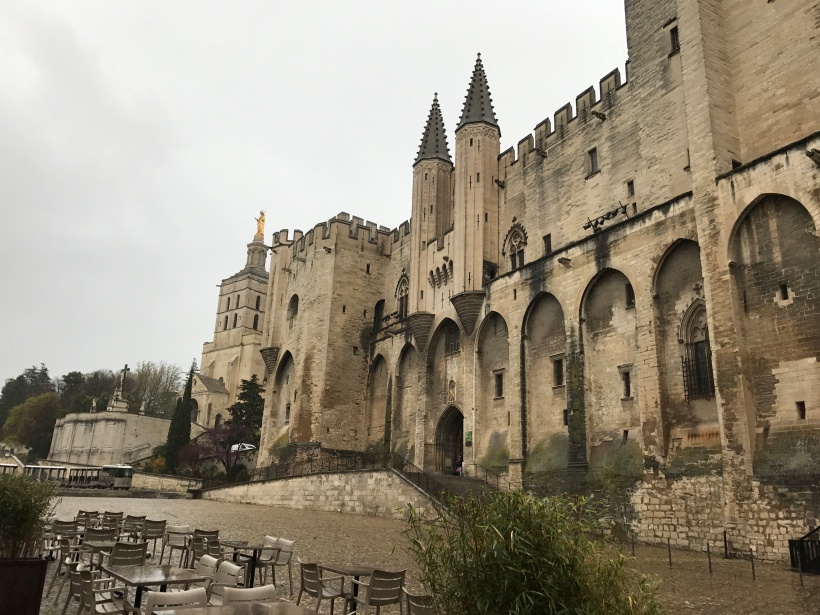 My journey from Susa to Avignon was the most eventful trip of the entire trip, and resulted in the very first BAD mood (not just cranky, but BAD). I was *very* excited about passing through the mountains and finally getting myself to the South of France. Turin, while I had enjoyed it, had been stressful (surprising lack of internet) and just stress of my own creating (I imagined my hotel had bedbugs. It did not.) I was ready to get to France, but also sad to be leaving Italy. I felt 100% more comfortable in the northern half of Italy than I had in Rome and Naples.

Leaving Turin that morning was a hassle. It was not a long walk to the train station, but it was pouring rain. I super dislike getting wet in clothing, plus the added difficulty of having glasses. Google also decided to be difficult, and told me to take turns down road that had tall fences that stopped pedestrians from crossing them. Finally arriving at the Porta Susa train station, I hurried in search of the standard train station bar to grab my last delightful Italian macchiato and cornetto con crema. The bar was completely overwhelmed by people, and the line went on and on and on and on. I hate lines, and I hate waiting and I wanted to find my platform instead of wait. So I had my very first vending machine coffee, but you’ll be pleased to note that Italian coffee vending machines are far superior to their counterparts in the US.

I was training from Torino to Lyon, then Lyon to Avignon. I was scheduled about a 40 minute wait at the station in Lyon, which was a healthy wait for a train, plenty of time to find your platform (unless you’re at the Bologna train station, sheesh). From the get go though, the train was late, projected to arrive five minutes after my train to Avignon left. Enter super stressed out Charlotte for like the entire ride. I did enjoy the scenery, but nowhere near as much as I should have.

When I arrived in Lyon, I was the first person off the train, and like jumped off the train before it stopped moving. Amazingly, there was a train-man (what’s the technical name…brain fart) and he yelled at me “AVIGNON?!” and I screamed back, “OUI!” He hollered at me that the train was on Platform 8 and that I should go! So I went, and thankfully it was not far. Upon reaching Platform 8 there was another trainman who asked if I was the passenger from Turin to Avignon and I said yes, and the second my feet were on the train it began moving. I collapsed in my seat so happy to have made it with all of my stuff in tow.

It was raining in Avignon as well. I was staying in an hotel for one night before my airbnb was available (and I wish I had stayed there the entire time. It was affordable and the breakfast was delicious, and there were people that I could have said hi to every day instead of dwelling in my solitude. And the internet worked! But I didn’t know yet that this would be an issue, haha). A very sodden and travel-weary Charlotte made her way to the hotel. 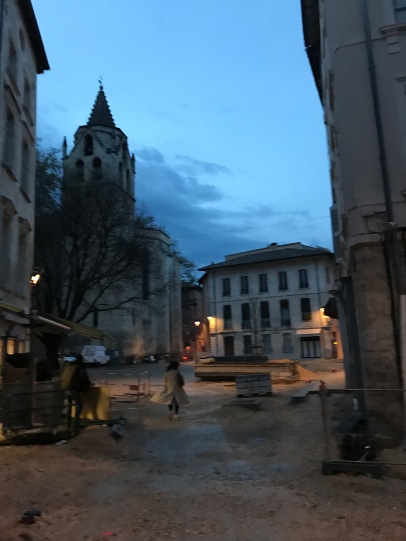 Regardless of the bad weather and the rain, I was immediately charmed by Avignon, I adored it. After getting some dinner in my belly (because remember, I didn’t get lunch b/c of the train mishap, nor did I have breakfast b/c of the bar wait) the crankiness wore away. I was in Avignon, in the south of France, where I had always wanted to go. The internet worked at the hotel, and I was again reconnected with the the world. I called my dad and sister and enjoyed my kebab (probably my favorite travel food) and watched some crappy tv.

The next morning I awoke hoping to find sun, but was displeased. It was again pouring wet, but I wanted to explore. So I did after a charming house-made breakfast with homemade jam. I had fun eavesdropping on the other guests’ conversation and practicing my French. The innkeeper man said my comprehension was superb. I, since the weather was so gross, essentially had Avignon to myself. There’s something beautiful about a rainy city, so I tried to appreciate it for what it was, which was shockingly beautiful and perfect.

I met up with my AirBnB which was charming. It was a cute little apartment on the top floor of a 17th-century building. At first I was quite pleased, but by the end of the day, I was kind of frustrated, as the internet had completely stopped working. Curse of the internet. It started in Torino and followed me for the rest of the trip.

But! The sun returned by the end of the day, and, in retrospect, beautiful, beautiful Provence, with all of its blooms and bites, made up for the lack of interwebs. 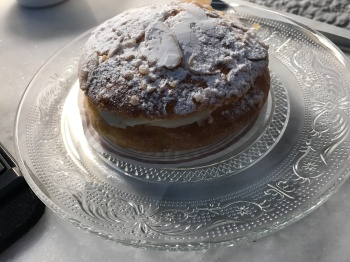 My last stop before heading back to Paris for my second, longer stay there, is Provence and Avignon. I will be in this area for a week, the longest stay of anywhere else so far. Mainly because I have a LOT to do. I chose Avignon because it’s smack in the middle of all of these wonderful things I need to see. The map above shows areas I need to visit, most all of which have arches.

I am also super excited to be in France again, and in Provence where I’ve never been. I have so much to do, that I hope I can fit it into one week!

I’ll be there in late October, so hopefully it will be not super crowded and mild, or even cool weather. In Avignon, I’ll have the opportunity to explore some historical sites from medieval France, including the Palais des Papes (gotta love those anti-popes!), and maybe even some 19th-century highlights. I’ve been told it’s cheesy but visiting the asylum where Vincent Van Gogh stayed and standing in his room where he ‘saw’ the scene he painted in Starry Night in St-Rémy is pretty cool (there’s also an arch in St. Rémy, so I’ll definitely be around….) I’ll also visit the Pont d’Avignon (below) and sing the little ditty, “sur le pont d’avignon, on y danse, on y danse…” All of the Frenchies will think I’m crazy 🙂

This is ninth in a series of blog posts that I will be doing to talk about where I am going during this trip, why I am going there, and what I’m expecting to see.