Though there are no extant arches in Arles, in antiquity there were several, and now it is home to one of the region’s largest archaeological museums. I took the train on a beautiful day, and walked to the museum, blissfully unaware that there was a free bus service that led from the train station to the museum. It was a longer yet beautiful walk alone the Rhône, unfortunately, my already sun sore skin was exposed even further and I could feel it get crispier and crispier. I felt like the dead little guy there in that waffenstücken. 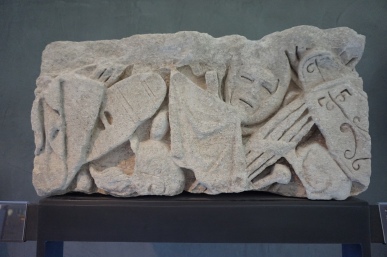 The Arles museum was one of the biggest of its type that I have seen in France. I could have spend much longer there. One of the most remarkable things they had in their collection was a riverboat that had been pulled from the Rhône in the past 20 years. Preserved using a process that replaced the water that had infused the wood with a preservative resin, the boat was HUGE. The picture here does not do it justice. Beyond the boat, the Arles museum had some canonical sculptures, sarcophagi, and mosaics.

After my time at the museum was done, I was not looking forward to long walk back to the train station, when I happily learned that there was a shuttle. I got off the shuttle when my google maps told me I was getting close to the Arles amphitheatre, so I could do some walking around and exploring about the part of Arles I cared about, which was right next to the train station. I found a small bistro in which to eat where the motherly proprietor clucked over my ever-reddening sunburn and brought me a small cut of aloe to rub. I ate a giant omelet with some of the most delicious frites I’ve ever had.

Arles was, in short, completely charming. It was sleepy in late March, perhaps a little too sleepy, but it like Avignon, pulled at my emotions and made me never want to leave. #Retirement goals.