The unfinished Tempio Malatestiano, designed by Leon Battista Alberti in the mid-15th century — the construction of this church’s history and its patron is scintillating. Sigismondo Pandolfo Malatesta wanted the church to serve as a mausoleum for himself and his lover (later his wife). Eventually, Malatesta was excommunicated, ran out of money, and the church was never completed as planned. Alberti was super influenced by ancient Roman monumental arches — here he has divided the facade into thirds (like the Arch of Constantine) and the rondels in the spandrels are a clear reference to the Arch of Rimini, which is a short walk away.

Rimini is a beach town on the east coast of Italy, a popular vacation destination for many Europeans. I admit, that I was not looking forward to visiting this small town and was not very excited about it.

Don’t you just love when you have to eat your own words? 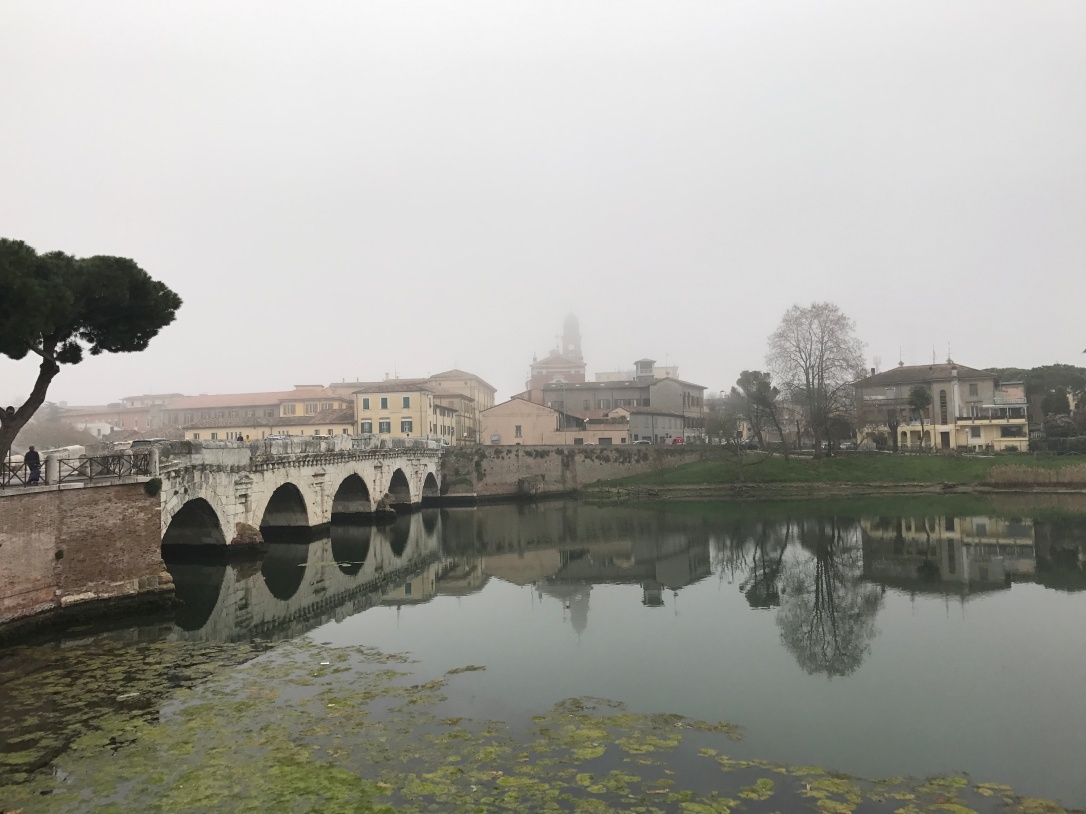 View of the historic side of Rimini and the 1st-century BCE bridge the Ponte di Tiberio. It was a delightfully spooky day and very “unbeachlike” weather, which is probably why I loved it!

Turns out that the train tracks split the town down the middle. On one side, you’ve got the beachy bits of the town and on the other, the older more historic area. All of my activities avoided the beach side and were firmly located in the historic center. Of all of the towns I visited in Italy, I felt the most comfortable here and I can’t really say why. It may have been my AirBNB which was a family home run by a woman whose children were grown. I felt like I was in a home, and not a hotel. She was so kind; I had a giant breakfast waiting for me every morning and a kind smile when I came home. We could not converse very well…her English was like 25x better than my Italian, but my Italian is *really* bad, but we tried! This was probably one of my favorite places I stayed.

When I rolled into town after a short train ride from Ravenna, I had very little time to get settled before having to jet to the city’s archaeological museum. I dropped my stuff and walked the short walk to the museum. Long story short, I arrived in Rimini on a Saturday, Sunday I was planning on visiting Ancona because the museum I needed to visit was closed on Monday. I THOUGHT that Rimini’s museum was open on Monday, but it was NOT. I was only in Rimini until early Tuesday morning, so I had to go RIGHT THEN.

The museum was probably one of the best local museums dedicated to archaeology that I visited (in Italy). There are TONS of regional/city-based archaeological museums all of various degrees of qualities. This one was pretty spectacular. It was right next to an archaeological site that was covered over, the so-called House of the Surgeon, and then the museum itself was spread over 4 floors. It was a lot of fun, and exactly the kind of museum I was into, super focused on the city’s development over time from literally the beginning of time to the modern era.

One of the in-situ mosaics from the House of the Surgeon in Rimini; super cool preserved archaeological site!

The rest of my time in Rimini was spent exploring the arch and the ancient bits of the city itself. The arch in Rimini was also way more impressive than I was expecting. First, it is HUGE. Second, the sculptural components on the arch are so much smaller than on later arches that are intricately decorated (like Septimius Severus or Constantine’s) that scholars have often described them as being diminutive. I didn’t find that to be the case, AND I think it’s a problem. For more, see my dissertation 😉

The Arch of Augustus at Rimini (27 BCE) facing the entry to the city — on the opposite end of the main road through town you come to the Ponte di Tiberio. The arch was encorporated into the city walls during the medieval period, which explains the nice little crenellations.

The city has great medieval- and renaissance-era remains that I definitely did not explore as much as  I could. I explored exteriors and that was about it. I definitely want to head back to Rimini some day, and I’ll just have to do the new bits then.

The Piazza Cavour in Rimini