After one full day in Paris, getting my sea legs, I headed off to Besançon to explore my first arch. I have long been excited for this particular leg of the journey…I’ve never been to this part of France before and this small city near the Swiss and German borders is rumored to have one of the prettiest Centre Villes in France. I can now verify that its Centre Ville is beautiful.

I took the TGV from Paris to Besançon, then the local train to Besançon proper, then the bus to my airbnb. I stretched my rusty French when I picked up my airbnb keys (honestly, just TRYING gives you so much street cred that and BEING NICE…I should make a post about loud, stereotypical Americans over here that completely justify our bad reputation.) Checked into my airbnb — which is perfect, and explored the town a bit.

The town is VERY charming — even in rain and with grey skies. The road through town, “La Grand Rue,” is the old Roman road that broke the town into halves (the cardo). Besancon (and the Grand Rue actually) is also the birthplace of several notable Frenchies, Victor Hugo and the Lumière brothers.

Unfortunately, the weather did not cooperate with my desires to explore this town to the max. I had planned on Sunday being relatively relaxed, but between the rain and travel catching up to me, I didn’t get very far besides a small walk. On Monday, a ton of things were still closed (I forgot that that was also a European thing) and the rain was RIDICULOUS. IT poured, and when it wasn’t pouring it was still raining pretty heavily, and it alternated between the two with little warning. I got nothing very productive done, besides wading through some ultimately unhelpful 18th-century sources. (At least now I know they’re unhelpful?) It turns out that France was hit by what they were calling Tempête Zeus a strong storm with winds that blew a bunch of trees down across the country, and several people were actually killed… (not near where I am though…my weather was mild in comparison to elsewhere.) Between feeling rather cooped up, and not getting to explore my monument the way I wanted to or the rest of the town, I was in a pretty dark mood by the end of the day. 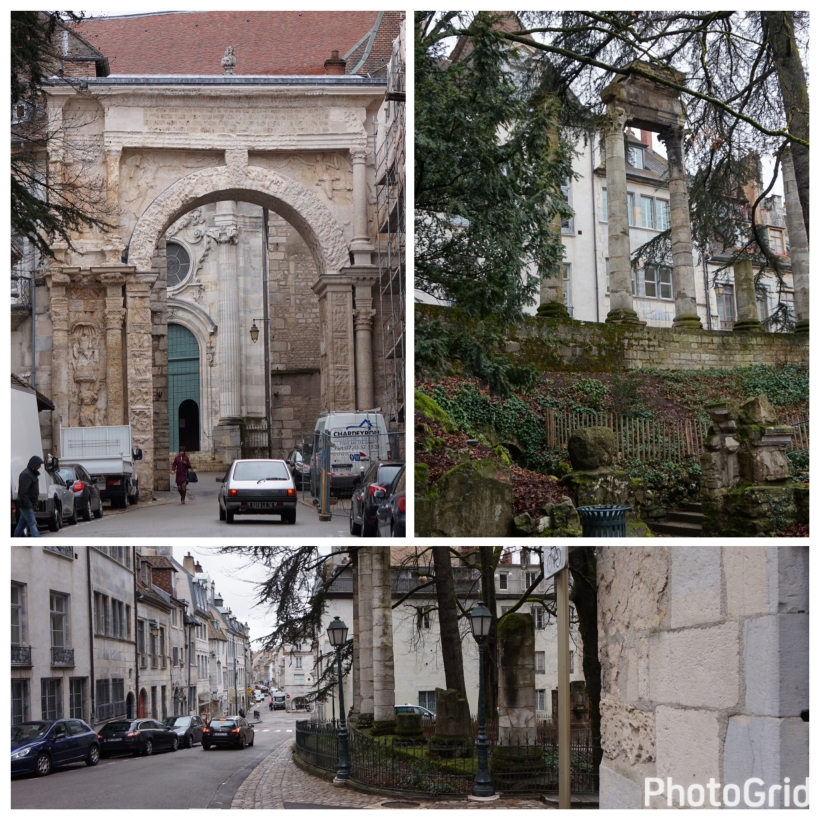 Today however, while the sun didn’t shine and the rain wasn’t completely gone, it was much improved on all fronts. I began by doing a quick walk around my monument and the surrounding area, which got my spirits up immediately. Then I went to the cat cafe which was WONDEFFUL. It made me happy to see the kitties, even if they weren’t into cuddles (I wanted it too much). Then I spent several hours *finally* doing all things I needed to do with the arch. I looked at the arch, photographed it, then explored the hill up to the citadel, including the Cathedral of St. Jean. I went back to my apartment, checked my photos, and then went back to the arch again for good measure (and the fact I had forgotten to get shots of a few angles.) All in all, it was a good day to end my stay in Besançon– even if I didn’t get to explore the way I wanted to. There’s always next time.