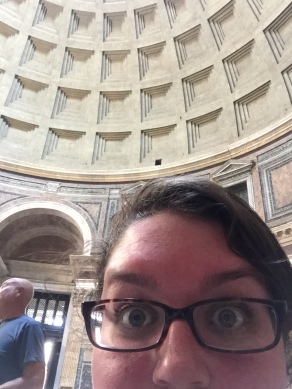 My goal for Friday was twofold. To get me a phone that works in Italy and to do some preliminary exploring. The day was a resounding success. I left kind of early to avoid being out during the especially hot times of day. I had done some googling the evening before to plot out the best route to the phone store, selected specifically owing to its location close to things I wanted to see.

Street labels are…not consistent so I was glad I have a) a relatively good sense of direction, b) done my homework the night before and c) I’m not afraid of getting just a little lost. I also took screenshots of directions on google maps because I’m crazy and felt kind of naked without constant access to Google out in the wild. (We’re not examining that point too closely). I took a rather indirect route through the streets of Trastevere (not pictured- was too busy looking to take pics) which truly felt like a time warp. Streets too small for anything larger than a moped (or perhaps a smart car), what looked to be like a large variety of shops and restaurants, and just a good atmosphere. I will have to return when it’s not 9 a.m. and perhaps a little more active and awake. It was a little sleepy in the morning.

After I emerged from the twisting streets of Trastevere, I crossed the Tiber and moved into the more central part of Rome. The streets continued to be rather narrow in parts with shops and restaurants. I got slightly off course, but continued to head in what I thought (and was correct) the right direction and I ran into a phone store I hadn’t seen on google (same company just a location of which I was unaware). I went in and took care of my phone issue and became jealous once again of how well Europeans can communicate in multiple languages and I’m sitting over here like a dunce.

The phone shop was RIGHT off of the Largo Argentina temples, four Republican era temples that were discovered during road construction in the early-20th century (top picture). I tried not to squeal because THIS was my first sight of Roman Things while wandering around. I smiled like a loon and took a bunch of pictures.  I continued to head north-ish because I thought that’s where the Pantheon was supposed to be in my head-map and I saw it almost immediately. I was approaching it from the rear and I could see the slight curve of the building and the beginning of the dome.

The grinning became more pronounced (especially because there was a group of middle-aged French tourists arguing about Roman things that I happily walked behind and eavesdropped—I have found myself wishing very ardently that I was as proficient in Italian as I am in French. It made me happy just to hear it spoken…by people who know how to speak it.) I might have gotten a little misty-eyed as I walked into the Pantheon (pictures 2 and 3) kind of in a little bit of disbelief that I was *actually there*. It wasn’t super crowded but there were people all around. Americans are super easy to pick out and there was a Canadian couple who had maple leaves on everything they were wearing. I don’t get that. Their kid was wearing a maple-leaf onesie and crawling on the Pantheon floor. I spent about an hour just staring and walking around in a circle.

There were a ton of gimmicky shops and restaurants on my way to my next site. I took a wrong road from my directions, THANKFULLY, because there was the Temple of Hadrian and people weren’t EVEN LOOKING AT IT, just walked right by it and didn’t even notice it. (Granted it is basically just a series of columns around which a modern building has been built. BUT STILL.) The touristy crowds began to get thicker and thicker as I moved toward my next destination.

I drew closer to the Column of Marcus Aurelius (picture 4), but the crowds all but evaporated. There were maybe four people in the plaza including myself. I once again spent some time looking from all angles. Across the street there was a Galleria type place that I stepped inside of because I was getting a little hungry and warm. I attempted to order a panini in Italian and was promptly answered in English (something that bothered me in France but relieved me here) and I sat and ate and fiddled with my phone trying to get it to work in the Italian network. I was successful! After a bit of rest I headed out for my last site that I wanted to see.

But alas, the Trevi Fountain was not fountaining (picture 5). Restorers and workers were crawling around in the fountain’s basin working on it. I unfortunately did not explore the signage to see how long it will be in this state (too many people) so I headed back to my hotel. I passed the Largo Argentina temples again and by this time I was getting a little worn out. I was almost home when I found this behemoth of a staircase that I needed to climb to get back to my hotel. I trudged up it slowly while this Italian woman flew past me and I felt very demoralized about my stair-climbing skills when I realized that stairs like this don’t really exist in the US and sure they’ll take some getting used to…and I will because there’s no way to avoid stairs, it seems, to get in and out of the neighborhood I’ll be staying in while I’m here. I will conquer the stairs and fly up them like that Italian woman by the end of my trip (unlikely—probably a more realistic goal is to climb them like a turtle instead of a snail.)

SO MANY STEPS on my fitbit. Too bad my fitbit does not calculate stairs climbed. I’d be winning this summer.

Today (Day 3) I took it easy. I woke up with a really uncomfortable sinus headache so I did some napping and reading, so nothing really to report for Day 3.

This next week I will officially start my summer program and we will be exploring sites and museums that concern early Rome! A week from today (June 20!) I will be heading to Florence to briefly check a few must-sees there.

A LOT to look forward to!